What are the weight limits on that bridge? 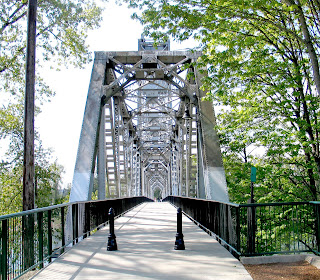 Since the Union Street pedestrian bridge was originally built to carry a locomotive, I assume it's strong enough to be full of fireworks spectators. The only reason I ask ( after reading about what a great view is to be had from the span) is that I lived in the Longview/Kelso area during the time a pedestrian bridge full of 4th of July fireworks fans, collapsed into Lake Sagajawea in the dark. I can't find an accounting of the incident, but I do remember that several people drowned that night. I'm fairly sure it happened after N and were married, so it was either in the late 70's or early 80's. I do remember what a horrific moment it was for the entire area. No one had considered whether it would be safe to fill the new bridge with people or not. I hope someone in town knows about the Union Street bridge.
Posted by KandN at 4:55 PM

I wondered the exact same thing as I read the headline. I suppose they had to make sure it was still structurally sound enough to accept that kind of weight load.

I sure hope so! I wonder how many people could crowd onto that bridge?

I was irritated that the Statesman felt they should advertise that as the best place to watch. Enough people were going to think of it on their own to fill the bridge I'm sure. I stayed away.

That old sad memory wouldn't have even popped up if it hadn't been for reading that suggestion in the SJ. But yeah, since when do any of us need help finding a new idea of where to watch fireworks?