(Updated below)
We thought "she" was big when we moved into this house the day before Halloween in 1991.  I'm thinking Silver Maple was just a teenager back then--or late teens perhaps?  We took a drive up from Roseburg to take one last look at our newly purchased house before moving in.  We were surprised at how deep (knee-deep on the deck) the fallen leaves were and the Maple didn't even appear to have lost more than an armful.  N became more familiar with this autumn ritual than the rest of us combined.  Every year his weekends, from Oct. 1 - Dec. 1, are spent worshiping Silver Maple, whether it's in crisp, beautiful weather or muddy, cold downpours.  His tools of worship have changed over the years, but the goal is the same--transform dead, golden leaves into compost. 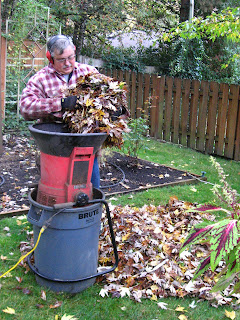 This year, both of us have begun to notice an abundance of deadwood in Silver Maple.  Amazingly, we can now see sky through her less leafy branches.  We tried ignoring, but it seems to have only gotten worse.  And so I began looking up local arborists.  Roger, the first, came for a peek last week.  He mentioned that he just attended a class about "Maple Wilt", that's affecting Maple trees as well as different types of trees.  After hearing that news, N did some research on the web and then peered at Silver Maple a little harder.

Roger's suggestion was to remove deadwood and begin reducing her height--starting at 20-25% this year.  Then N and I begin to wonder if we'd end up putting more money into reducing her height, only to find out we need to remove her one or two years down the road.  Gads!  I hate these kind of decisions!  Especially since we've grown accustomed to and rely on Silver Maple's shade every summer.  Not to mention all of her colorful friends: Flickers, Sapsuckers, Nuthatches, etc.  But the idea of having one of her four trunks land on the house?  Chilling, absolutely chilling!

On the other hand, we have longed for enough added sunlight for our struggling roses to thrive and to be able to grow a small, vegetable garden again.  Then it dawned on me--if Silver Maple were gone (resisted urge to make a pun and say "leave"), N would have the gift of (somewhat) way less leaf gathering.  That's a large increase of weekend time to be handed!

Now I'm waiting for a return call from another arborist.  Hopefully, we don't do our usual procrastinating on this decision.  Hopefully.

Update:  I contacted arborist/tree service #2 yesterday.  He arrived just in time for me to make it to my very important appointment (happy hour with the dames).  :)   He had a slightly different take on the Maple, one I knew would appeal to Norm's desire to keep the tree--even though getting rid of it gets us a bit closer to our dream of extending the house out 10 feet.  They'll be here this afternoon to give her a shave and a haircut.  No, not for 2 bits, but it's better than we feared.
Posted by KandN at 10:19 AM