I'm re-posting the following. Hoping that someday there will be a grant opportunity that matches the project or a public official who sees the healthy benefit potential: 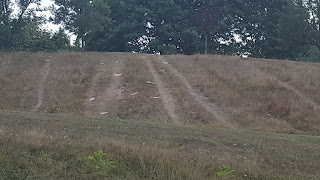 (link to printable doc)
One of the natural features of Nelson Park that can be enhanced are its hillsides. Already, people use the hillsides in the center of the park during snowy periods for sleds. During the summer these same hillsides are used to slide by sitting on cardboard sheets that slide over the grassy hillsides. Both of these recreational uses do damage to the hillsides by killing the vegetation and exposing bare dirt and causing ruts in the hillside. This proposal can be used to enhance the sliding experience, repair the damage that has been done to the hillsides, and increase the physical activity of children by encouraging them to climb the hillside in a safe fun environment.
The basic proposal is to add four slide areas to the hillside between the newly renovated play area and the gazebo on top of the hill. Two slides would replace the current sliding area and provide a safe sliding area and stairways to return to the top of the hill. One slide would be added to the short hill immediately adjacent to the new play area. This slide would be targeted toward smaller children and if possible children with physical challenges who currently sit and watch the people sliding down the bigger hill. A fourth slide would be just north of the first two slides. This slide could use natural features of the existing hill to support a longer, less steep slide that has a couple twists and turns for added fun. The final part of this proposal would be to improve the vegetation on the hill. There is a fair amount of poison oak that should be eliminated from the hillside. Trees and shrubs could be added that would provide shade for the slides and help to discourage in-growth of poison oak, black berries, and other unwanted species.
The cost of this project is highly dependent on the materials used for building the slides or even the types of slides used. I have researched a company that makes plastic slides for use on embankments. Their slides would cost about $40,000 for one slide. Other types of slide would change this estimate. The re-vegetation could cost around $2,000 depending on the types of materials used. My suggestion is that we begin with one slide and a set of return stairs as a pilot to gauge cost, interest, and durability. If the project garners the support I think possible, grant support, local donations, neighborhood labor and donations could be used to complete the project.
I have seen on-line examples of other cities that have developed embankment slides in their parks. Each one expresses that these additions have been a valuable addition to their parks system. There are a number of unknowns for Nelson Park  like initial cost, maintenance cost, liability, and developing a need for restrooms.  I would like to work with the city to explore the embankment slide opportunity, and to add a fun, useful new feature to Nelson Park. If the expertise does not exist with Salem Parks staff I would help expand the research on this project to cities who have experience with such a project.