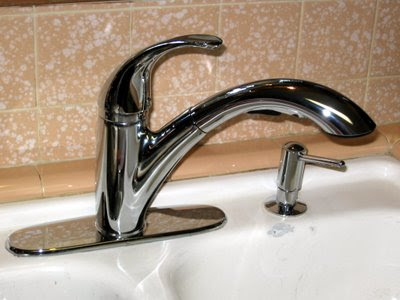 On Sunday, we had one of those, we-didn't-plan-on-replacing-the-kitchen-faucet-but-now-we-have-a-nice-new-one-that-makes-the-rest-of-the-kitchen-look-even-shabbier, days. The valve in our kitchen faucet has been doing odd things the past week and a half, until I noticed Sunday morning that this valve/pressure thing was causing the sprayer to slowly ooze water that traveled down its hose under the sink. Augie (our friend at Geo Morlan) had told us that once a Moen fails, you might as well replace it, but it didn't even give us a chance to try and change its cartridge. Norm mangled it, because it was so stuck or froze together.
We left to go look for a new faucet at Home Depot. While we were there, a woman came up to us and told us there was a place in town that was handing out free beer or wine while you shopped their plumbing. We laughed and hoohahed with her and when she left we both turned to the other at the same time,
"where did she say that was?". So we missed out, totally. So sad! ;>) Seemed a bit dangerous, though. DIY with booze? We finally picked out a faucet at Geo Morlan and Norm began the installation. That is, he did begin after a trip or two to Ace up Madrona. :>/ While replacing the hoses that go to the new faucet, his wrench hit the drain pipe - not the main one, the one that connects to the main one - and discovered it was soft, rotted and easy to break. Seemed like another step, not too bad, he can handle this. Took about an hour for him to be able to remove it - finally resorting to a saw. Sheesh! It just peeled right off once he had a loose spot to pull on. Thank goodness Fred's had the pipe and drain seat (?) that he needed so we can now use the sink and the nice new shiny faucet.
He decided he'd be a rich man if I'd been paying him Sunday plumber rates for the entire day.
I guess that means he won't be benefiting from the use of this faucet??
Posted by KandN at 12:22 PM