If my reaction to a Twitter comment today is any indication--rumors make me c-r-a-z-y. And from that lead-in, you might have already guessed that one of my main roles as a teen was being fodder for the rumor mill. In a small town with a small school, that makes you center stage entertainment. I had it on good authority that I was held up as an example of what not to do during many family dinner discussions.

There were the first rumors. They made me sad, angry, indignant, outraged. Then came the helplessness, depression and suicidal thoughts. And finally the "Oh what the hell! I'll give them something to talk about!" Does that make rumors like a self fulfilling prophecy? {laughs to self}

And yet, like so many life experiences, it's part of who I am--> someone who gets crazy over rumors.

You never know what you'll stumble across on the web. 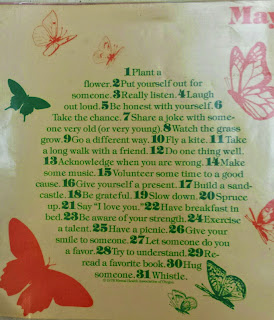 In 1978 I purchased one of these "Uncalendars" and have often wished they were still available to buy as gifts.

I finally remembered to contact the Mental Health Association of Oregon and spotted the link on their sidebar. Woohoo!

I'm not sure what age I was in this first memory of my parents donating blood. I remember Dad parked the family car in front of our small hometown's community hall. He and Mother probably gave my brother and I warnings about good behavior in their absence. And in they went--a mysterious event where children weren't allowed. My interest was piqued.

After that, I remember years of eavesdropping on Mom and Dad's post donation conversations: how many gallons they had donated, blood from their ear instead of their finger, who they met. All fascinating to this youngster, as well as believing it was something I would do later in life.

Years passed, I achieved adulthood and eventually I found myself with a husband, two children, living in Roseburg, Oregon, with a sweet neighbor and walking partner. During one of the daily walks with my neighbor, both of us discovered that we'd grown up thinking we'd become regular blood donators like our parents, but had never stumbled across an opportunity. We made a plan and began donating together. 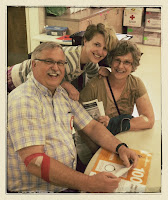 More years passed, and our family landed in Salem, Oregon. One evening, I learned husband Norm had begun to donate blood regularly. I'll admit it, I was a bit giddy over the possibility of donating together. Repeating my parent's co-tradition was something I hadn't even imagined. I have no idea how many years we've been meeting up downtown after work for our "blood dates". I'd like to think we've inspired others to do the same. It's a tradition worth repeating. 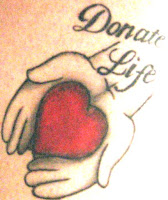 P. S. I'd be remiss if I omitted the following, though it veers slightly from my story above: In 2001, I was taken to the hospital with a stomach bleed. I ended up losing a significant amount of blood and found myself on the receiving end of two pints of life. Coincidentally, I had been pondering what my tattoo would look like--something I had decided to do on my 50th birthday. After my event, I was inspired. And with my eldest daughter's help, my tattoo's design was created: "Donate Life", with a heart held in open hands. The most amazing part? The tattoo artist's father had been the recipient of a double organ transplant the year before.

From my Dad, in reply to my question as to how he and mother began donating blood:

That's kind of a tough question.

Kind of a patriotic thing to do,
help somebody and you don't care who.
Not much effort and mostly painless too.
You got cookies and juice when you were through.

It just got to be a habit after a year or two.
Mom was proud of her record and I was too.
I hadn't had a virus that ninety percent  do,,
so my blood was saved for babies that arrived Before they were due.
~KWJ August 2015
Posted by KandN at 12:28 PM No comments:

All summer I have kept my eyes open for flanken cut beef short-ribs at Winco. On Friday, there they were. I scooped them up into my cart for dinner and then Fran found the following marinade online.
This was the best version we've ever eaten--which is why I'm leaving the recipe here. I don't want to forget it. :)

We put the marinade in a plastic bag with the ribs for an hour and then grilled them over charcoal.
Posted by KandN at 11:57 AM No comments:

It's either my cravings or the need to use a certain ingredient that cause me to search and find recipes like the following. But mainly my cravings.

This particular recipe made me realize I need to replace our mortar and pestle. The small bowl on the food processor is usually the tool of choice for this type of task, but it's not efficient when there aren't enough ingredients in the bowl.

Also, I used boneless, skinless thighs to make this. Next time I'll use thighs with their bone, but remove the skin. I believe thighs have enough flavorful fat on their own.

In addition to the lemon and fresh herbs, the chicken thighs are flavored with an emulsified mash of garlic, salt, and olive oil, called allioli. I like to garnish each plate of chicken with a spoonful of romesco sauce.

Using a mortar and pestle, mash the garlic with a large pinch of salt to create a coarse paste (or use a small mixing bowl and the back of a spoon, or mince the garlic very finely on a cutting board). Add the oil very slowly in drops while pounding and grinding the paste, continuing until the allioli is thick, creamy, and emulsified. Put the chicken in a bowl. Rub the allioli all over, including under the skin. Cover and refrigerate at least 2 hours or overnight.

Heat the oven to 425°F and set an oven rack in the middle of the oven. Arrange the lemon slices in one layer in a large shallow roasting pan or baking dish (9x13x2 inches is good). Top each slice with a piece of rosemary and thyme and a sage leaf. Set the chicken thighs, skin side up, on top; sprinkle them generously with salt and pepper. Bake until the skin is golden and the juices are clear, 45 minutes to 1 hour.

Sometimes the lemons and chicken produce a lot of juices, in which case you can make a delicious pan sauce. Transfer the chicken (keeping the herbs and lemon slices underneath) to a plate and cover loosely with foil. Tilt the pan to pool the juices in one corner. Spoon off the fat that rises to the top. Set the pan over medium heat (if the pan isn't flameproof, pour the juices into a small skillet) and scrape up any stuck-on juices. Let the juices boil and reduce so they thicken to a saucy consistency. Drizzle the sauce around, not on, the chicken to maintain the crisp skin.
Posted by KandN at 11:27 AM No comments: