Early on in my childhood, I struggled hard against what I saw as a sexist division of chores.
"Why do I ... ?"
"Why can't I ... ?
"This is stupid!"
Why oh why, would I want to be stuck inside, washing dishes, cooking, vacuuming or dusting? And then, there was a brief moment in my early adolescence, where my Dad allowed me to help/observe, while he worked on the family vehicles and when he helped (I mostly observed tbh) me to make a small foot stool. Which is probably one of the reasons, besides the folks being so done with parenting, I never learned to do laundry. Sorry about those sacrificed shirts, N.
When I landed my first job at Sizzler, the struggle began again. I did manage to push all the way into my assistant manager training, but then the owners pulled the rug out from under me--saying I could only complete my training by learning to cook and manage the grill ... but not allowing me to use the grill. So I soon skedaddled. I heard, years later, from a younger co-worker, that she decided to pick up where I was left stranded, and was able to become an assistant manager. While I was happy for her, I was disappointed. Guess I was a few years too soon.
When N and I, joined forces, that old struggle was still niggling at me. The day, I replaced a burnt out blinker bulb, with the incorrect bulb, and the brake lights went goofy on a long trip, was a moment. And when I tried to move a large, rolled rug by myself, and N came home to find me on the floor, unable to get my back muscles to cooperate, was another. I backed way off, until one summer, when our offspring were older, I decided I'd be doing N a favor, by mowing the lawn, every week. I mean ... I had summers off, so I wanted to gift him some free time.
His reaction confused me, until he spelled it out--I wasn't "giving" him free time, I was "taking" something away from him. Something he felt defined him. Once I could turn it around in my head, and see it from a different perspective, it became clear. Maybe my personal struggle was more about finding my place in the world, and then I didn't know when to quit? Or perhaps I was so deep into my own feelings and ideas, that I failed to watch and listen? Or maybe it took me that frigging long to grow up. Yeah ... maybe that.
Love, K
Posted by KandN at 2:21 PM No comments:

All it took was an online comment from a bud, about the habit of licking the rim of their mug, while drinking the daily brew, to usher my Mum into my head this morning. It usually happened when one of us, in Mom's vicinity, would take a swig and an "ahhh" would sigh out of our mouths.

"You used to do that when I was breast feeding you. Always wondered if you were copying your father's first sip of the day."

And then she'd share about her theories of being able to tell if other people were breastfed as infants, all because of the way they'd place their tongue, when they drank out of a vessel.

Thanks, D. That made my morning. Love, K

September is the Ninth Month 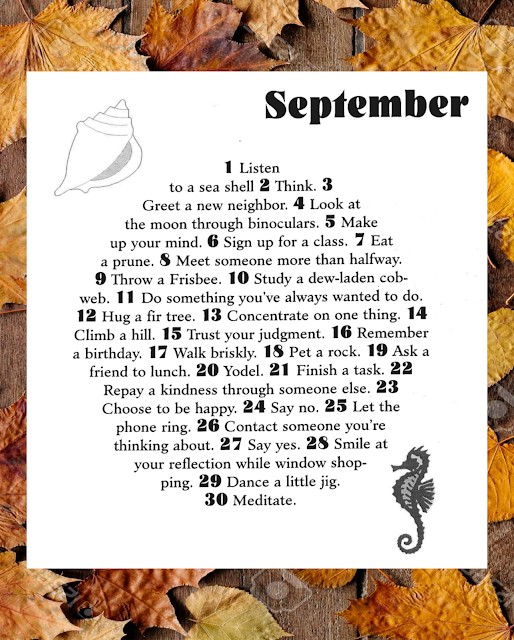 There I was, in the bathroom, getting ready for bed, when I spied the container of new hair product on the counter. And, since curious is my middle name, I wondered how it smelled--because you never know if a hair product's scent will be pleasing or nudge an old memory, or disappoint. Yes, color me curious.

I unscrewed the wide lid from the wide mouth and tried to lift an edge of the paper seal. And in true K fashion, I decided to go ahead and remove the entire paper seal, only to get the pomade on both the counter and my hands. And, I ask you, would you want to waste that dollop? Not I. No sir-ee! "Let's give this cream a try right now, because tomorrow is hair washing day."

Not the best decision--one I will try not to repeat in the future ... hopefully. (Are you listening, nighttime K?) The new product, smells like many a scented candle I've burnt over the years thanks to gifts from students. Kind of cinnamony and something else ... maybe apple? And, boy howdy, was it powerful! I tucked that scented candle head of mine into my sleep cap and hoped I could ignore the smell and slip off to sleep.

It wasn't easy to ignore and keep myself from hopping out from under the covers to go shampoo my head, but I stayed and slept. N thought it smelled good, fine, "I like it", so there's that. And that's important, when you cohabitate, in my opinion. I might need to wash that sleep cap though ...