Can this be true?

I just finished a well written, appealing story by a first time novel writer--The Cradle. I enjoyed the characters. The tale never felt contrived--as a matter of fact one part seemed to have been written by someone who had to have experience in the subject matter.

But I have a beef. The same beef I had with a recent (but short lived) TV series called, Life Interrupted. A main character gives up an infant for adoption and the infant goes from one unstable situation to another with their life beginning in an orphanage/home and ending in a string of unfortunate foster homes.

Is it really possible for an infant to end up unadopted in the U.S.? I remember so many newspaper stories, over the years, of the sad circumstances of an abandoned infant and the ensuing throng requesting to adopt the child.
Were these anomalies? I can't believe that's true.
Posted by KandN at 6:24 PM No comments:

Fran ended up making the popular gratin of cauliflower for one of our contributions to the family Christmas dinner. I'll have to wait to try my brainstorm idea of turning æbleflæsk into a tian. She also made one of the versions of a salted caramel chocolate layer cake, thanks to inspiration from @Blueeyesbrenna. 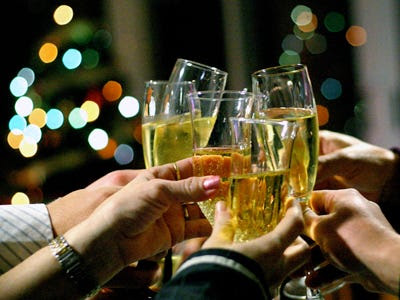 The day after Christmas I was reading Pioneer Woman's blog and came down with a craving for her Beef with Snow Peas. Delicious! All these years I believed that flank steak was another way to cut the beef's round steak. I know what we'll be using on our Asian favorites from now on.

Oh and that recipe for wine punch I heard on NPR from Nigella Lawson? It was a big hit on Christmas. One problem, even though two of us brought enough to make 5 batches it wasn't enough. It was that good.
Posted by KandN at 10:25 AM No comments: 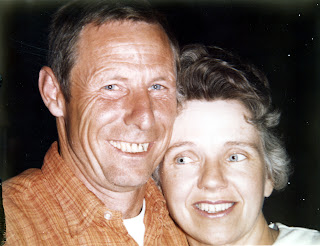 You'll always be here, won't you?
A permanent fixture in my head.
Lessons learned
Flora and fauna names
kitchen tips
and relationships, too.

You'll always be here, won't you?
A permanent memory in my head.
Jumping rope in the kitchen
The grapefruit diet
Winding curlers into G'ma Curley's hair
and warm pudding, too.

You'll always be here, won't you?
A permanent conversation in my head.
Behind the wheel
Cutting parchment
Vacuum in those corners
and triple word scores

You'll always be here, won't you?
Standing right behind me
Reading what I'm writing
I can hear the smile in your voice
Your warm soft laugh
and your embraces
your warm embraces.
~Your Loving K
Posted by KandN at 7:33 PM 3 comments:

....at least she left us as peacefully as possible--in her sleep.
Love you, Mom. 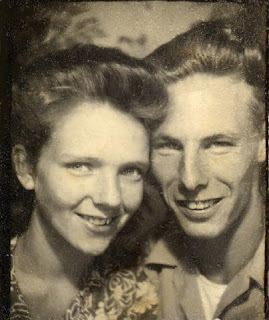 Update 2016:
This year I made the recipe below, but without bacon, one cup of reduced-by-half apple cider vinegar sweetened with a tsp of sugar and browned panko & Gruyere for topping.
I used some leftovers to create a breakfast hash. I added 3 cooked chopped brats, 3 broiled smashed potatoes and 6 eggs. Delicious!

One Christmas, several years ago, I took a chance (like I often do) and made a recipe I stumbled upon while browsing on the internet. That's when I learned that the combination of bacon, apples and onions as a side dish is a wonderful accompaniment to ham and turkey. Since then, I've learned it's a Danish recipe with nearly as many variations as there are Danes. (slight exaggeration) I've never found the first version I made again, but (I'm guessing here) with the combination of aforementioned three ingredients it's hard to go wrong.

Here are the three latest versions I browsed and found. Please share if you have yet another.
Click here for a printable version


Apple, bacon and Onion side dish
(from Channel 14 in North Carolina)

In today’s recipe, you’ll use fresh fall apples to make a vegetable side dish with onions, bacon and dried thyme that's especially good with roasted pork.

PROCEDURE:
Use a heavy bottomed saute pan or cast iron skillet to cook the bacon until it's nice and crisp and then take it out of the pan to drain on paper towels.

Pour off some, but not all of the rendered bacon fat and add 3 cups of thinly sliced white onions right to the skillet. Stir those around and add a heaping 1/2 tsp of dried thyme and cook the onions until they start to soften up. Although it's not necessary, after a few minutes you can add a splash of apple cider (a cup or so) to the onions and let that reduce.
Once the apple cider has reduced, add 3 cups of sliced apples and cook those until they start to soften. You can peel the apples, if you like, but it’s nice to leave the skin on, especially if they're a red apple, for a little added color.

Season with a little salt and pepper to taste, crumble and add the bacon and it's good to go!

HINTS:
Leave the bacon out, if you like, and saute the onions in 2-3 Tbs of butter instead. Use 1 Tbs of fresh thyme in place of the dried thyme if you have it.
Serves 4-6 as a side

"Go ahead and try this, I think you'll be pleasantly surprised. The smoky flavor of the bacon enhances the carmelized apples and onion and puts this over the top.


6 Slices of bacon, 3 per person
1 apple, sliced
1 onion, sliced
2 slices Rye Bread, one per person.
Cook bacon til done. While this is cooking, peel the onion and slice the onion and the apple. Take bacon out of pan and place aside. Drain pan of most of the fat, leaving about 1-2 tsp. of bacon fat in the pan. Add in the onion and apple and cook until it has started to turn color, and carmelize. Add the bacon back into the pan and continue cooking. When the onions and apple are nice and carmelized, take out of pan and serve on a slice of rye bread. You can up the quantities depending on how many people you are serving.
Enjoy.

* You can also make this vegetarian by omitting the bacon and cooking the onion and apple in some olive oil. Not only would it be meat free, it would also be a lot more heart healthy. I've done it like this many times. And apart from the tsp. of olive oil, it's also pretty fat free. Onions and apples aren't high in calories, and their health benefits prepared with olive oil, well, let's put it this way, it's all good for you that way."


"A few notes about Æbleflæsk.
1. You’ll need a deep-sided frying pan because there’s a mountain of apples and onion that need to fit into it. As it cooks, the volume will reduce by half (at least).
2. If you don’t have a lid for your frying pan, cover it with foil. You don’t want the cooking apples to dry out.
3. Don’t overcook the apples. They should be tender when tested with a knife or fork, but not allowed to disintegrate into applesauce or mush.
4. Don’t throw out the bacon fat; you need it to flavour the apples. It’s just not the same without it.
5. We like the apple peel. Peel them if you wish.

Place the bacon in a cold frying pan and fry slowly until crisp. Do not allow the bacon to burn as this taints the flavour of the apple when the bacon fat and apple chunks are mixed together. When cooked, remove the bacon from the pan, and place between layers of kitchen towel to drain. Add the apple chunks and sliced onion to the pan with the bacon fat, toss thoroughly so everything is mixed through, and then reduce the heat to medium-low. Clap a tight-fitting lid on the frying pan, and allow the apples to soften and the onion to cook until translucent. Stir every few minutes to keep the apple from catching on the bottom of the pan. Cook for approximately 15-minutes until the apple chunks are tender. Don’t overcook; this isn’t applesauce.

Now sprinkle with sugar, stir and turn cooked apples gently, and taste. Adjust sugar if necessary. Add salt if you must.

To serve, poke the bacon into the Æbleflæsk, and serve with slices of dark rye bread. The Æbleflæsk is usually spooned on to the top of the rye bread as an ‘open sandwich’ with the bacon eaten on the side. Enjoy!!"
Posted by KandN at 11:01 AM No comments:

I discovered this video thanks to Time's top ten creative videos.

Have you ever gone shopping and found yourself perturbed by another shopper moving at a turtle's pace and the nearly impenetrable knot of people that forms in their wake? Maybe you've gone so far as to wish they had stayed home and not made your errand even longer than you had allotted time for? That might have been Fran and I.

I nearly apologized, but you see this is such a big, wonderful moment for me--Fran is walking! Not just the few feet to the kitchen or bathroom, but REALLY WALKING. Each time we leave the wheel chair behind in the car, my heart pumps with a warm surge of hope and happiness. So no, I'm not going to leave her at home.

Every possible opportunity, I'll be taking her out into the world she's seen little of in the past couple of years. If you see us, please remember to smile and give us a little space--jostling isn't helpful when you're working on balance and concentrating on putting one foot in front of the other. If we're not preoccupied with the journey, we'll return and remember your smile.

Thanks to @SalemRebekah, I had an epiphany in the shower.
Isn't that where everyone discovers their best ideas? :>)

It's sad, but when a classroom has a student who doesn't celebrate Christmas (within our sheltered Oregon community) , there tends to be some grousing. It can be minor or it can go farther, depending on the teacher and the family involved.

The classroom to the south of us has such a student. And yes, I have been hearing some grousing.

After reading @SalemRebekah's tweet about refusing to inject any religious holidays into her course of instruction, I realized how families might interpret a teacher's decision to include/teach what they believe to be the only thing people want to learn or hear about.

Coincidentally, the classroom aide to the south of us, was sad because her favorite Christmas stories wouldn't be read this school year. It took some time, but eventually it dawned on me that perhaps we need to think and try harder when it comes to the stories we could be reading to the short folk.

On Twitter there were 2 friends who had recently experienced a "pay it forward" moment during their morning caffeination. And then @SalemRebekah tweeted -- "Informed coworkers today that I would be keeping church & state separated by not making kids do Christmas related assignments. #rebel"

It was at that moment when it occurred to me. Christmas stories weren't important. Sharing, caring and stories about generosity were the key. (slapping forehead)

So now my quest is centered around books to read to the wee folk about "paying it forward'.
So far I have the following books on a list of "to buy": (Please keep in mind that my focus is on kindergartners)