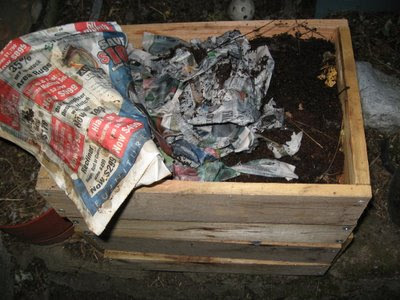 I've been bringing worms to school for the last 7-8 years to share with the short people for science. Three years ago, I found a small and simple worm box on Ebay, cheaper than it would've cost N to build. Much easier than going out in the rain every November and digging through our compost to look for worms. I'm not a champion worm box owner, but I do give them a level of care that keeps them alive and multiplying.
One of my co-workers recently moved to a larger home that leaves little of her property left for a yard. She told me that they no longer had room for a compost pile and wanted to know if a small worm box (like mine) would be able to take it's place - for kitchen garbage, not grass and leaves. I told her that if she produced the amount of fruit, vegetable and coffee ground garbage that we do, there's no way the worms in a small box could keep up.
More co-workers joined the discussion and one wondered out loud if our yard debris containers would be a suitable replacement. None of us knew for sure, but it made perfect sense. Since then I've gone to the county website and found out that kitchen garbage is on the list of acceptable debris that can be put into "big green/grey".
Good news for people who feel they don't have enough room in their yards to compost and good news for people like us with dogs who like to mine the compost for kitchen treasures!
Posted by KandN at 11:56 PM

Hi Karla,
About the compost and dogs - today I was talking to David Bryant (Merz) and he told me how his old dog got into their compost pile and went into convoltions and had to go to the vet...it cost them $600 to pump his stomache. David said it a mushroomish thing was all he saw, but the dog survived...just thought you might like to be aware. What a coincidence, huh?
Love you, hugs, S

Fran's been worried about that. So our decision to move the kitchen garbage to the big plastic container for yard debris was for the dogs, plus Fran's peace of mind.
Hopefully, the grass and leaves won't be a problem.