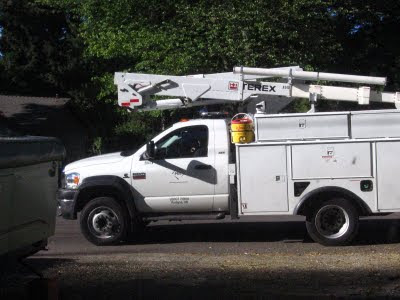 First I received a text from James and then a little later a voice mail from Lise, while I was at work this afternoon.  They both wanted to let me know that there was a wire hanging from the power pole near the end of our driveway.  It's not the first time and it's not ours, but it was a concern when Lise had just driven up in her car and saw the school bus open it's doors to let a child out very close to the wire.  She quickly exited her car and stood between the child and the wire.
Probably a good idea, since the vehicle that responded is from PGE.
Posted by KandN at 5:36 PM