When N and I ate the two together the first time, I assumed the orgasmic experience was due to my hunger or the red wine. The second time around has proven to us that it wasn't a fluke. This is a wonderful pairing.
You can follow Barefoot Contessa's recipe or you can realize it's one of those dishes you can put together by the seat of your pants--to a certain extent.

This time around all I had was the craving, thyme, olive oil, zucchini, red potatoes, an onion, a red pepper and some Gruyere cheese.

In a large skillet, I sauteed a thinly sliced onion with a sliced red pepper on medium low for approximately 20-30 minutes, stirring about every 5 minutes.

While the onion and pepper cooked, I sliced (thinly) two small to medium zucchini, four small red potatoes. a handful of plum tomatoes and shredded a half cup or so of Gruyere cheese. 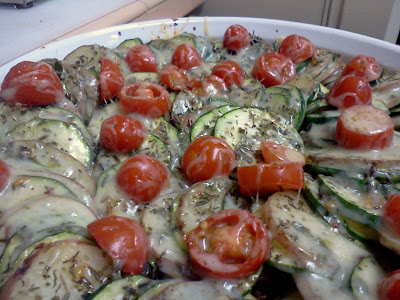 When the onion and pepper were done, I spread them evenly in the bottom of a 10 - 12", round dish. In a spiral pattern on top of the onion and pepper, I alternated equal amounts of zucchini and potato slices. When you end up with two many slices (and usually you will), go back and add slices into the spiral.
Then I added the sliced grape tomatoes on top, drizzled with olive oil, sprinkled generously with thyme and covered with foil.
I placed it in the oven for 20 minutes.
Finally, I removed the tian from the oven, sprinkled cheese over top and put it back into oven without foil for an additional 10 minutes.
Posted by KandN at 7:53 AM