How Long Since You Walked On the Beach?

Posted by KandN at 7:39 PM No comments: Links to this post

Not sure where we ever found this recipe. It ended up being a family favorite when the girls were young(er). I believe the original called for ham instead of wieners, but the person who gave me the recipe recommended the substitution. I cooked for small children, who was I to argue.
Must be one of the cheapest meals ever . . .

Stir in remaining ingredients except for sour cream. Add sour cream after simmering for 20 minutes.
Serve over rice.
Don't forget the vegetables . . . :)
Posted by KandN at 5:38 PM No comments: Links to this post

How far did this scene seep into my brain cells? Far enough that after all these years I still laugh over their discussion some mornings when I put on my shoes.


Posted by KandN at 6:08 PM No comments: Links to this post

My first memory of hearing about chiropractors was sometime in the mid to late 60's. My Dad had back issues that were aggravated by the repetitive actions of pulling and re-positioning boards on a conveyor belt in the mill where he worked. Since I was still smallish, whenever his back was giving him problems he asked me to "walk" on his back. I don't know if he experienced an especially bad injury or if he made an appointment with a chiropractor on a recommendation from a doctor or friend. I do remember that he found relief and would talk about it to anyone who would listen. 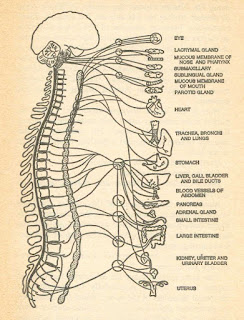 My second memory, came from a branch of the family on my mother's side. They went through, what I like to call, their "chiropractor period". I have no idea how many years it lasted, but I'll never forget how they swore by their doctor for everything--even sore throats. And that's when I placed chiropractors in the column of things I approach with skepticism.

Then daughter Fran began to have severe debilitating migraines during her years at OSU. Friends brought her home out of concern a few times. We'd take her to urgent care, where the doctor would inject her with something that would knock her out for at least 12 hours. It worked, but she hated losing all that time. Then she began seeing a pediatric chiropractor in Philomath. She told Fran that the headaches were coming from muscle tension at the base of her skull. As long as she was seeing a chiropractor a few times a month, the migraines would stay away. Sure beat the heck out of the drugs.

After Fran graduated from college, her life came to a stand still. She went through 4 years of hellish undiagnosed abdominal pain. It took a year, but eventually, I was able to talk her into going to a local chiropractor who I had heard amazing things about from people I trusted. We're still not sure if her recovery is all due to him, or if she was helped by the injection from the 5th pain doctor she visited around the same time. I think it's a combination of the two.

Naturally, when I hurt my back last week, Fran asked, "you're going to go see Dr. Freeman, aren't you?" Ah! An excuse to meet this man I've heard so much about! How could I resist? I have never recovered so quickly. And let's just say, I'm no longer skepticism about chiropractors. Particularly this one.
Posted by KandN at 11:59 AM No comments: Links to this post

This summer will mark my fourth year with hearing aides. What's my favorite part of this? I'll be eligible for a new set. Yahoo! Very exciting in my book. Maybe I'm overly optimistic, but I'm hoping for even better amplification and sound quality. The technology continues to improve. Plus with a few years of wearing experience, I have a better idea of what to ask for next time around. 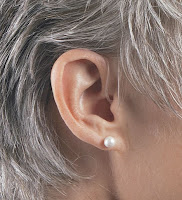 It's not all warm fuzzy news. Though my hearing aides have been an incredible help, they're not full-proof. There are still situations I have problems with--crowds being the main one.  But even in a crowd there are some people's voices I can hear and understand. It has to do with their tone, speed of speech and enunciation. And of course proximity helps, too.

I''m ashamed to admit this, but I avoid conversations with people whose voices are difficult for me to hear. There are only so many times I can say, "I beg your pardon?", "I'm sorry, I couldn't hear you" or  "could you say that again?". And I'm sure the person I have trouble hearing wonders what that expression on my face is. I haven't seen the expression, but I'm guessing it's a blank look as I will the sounds that came from your mouth to go reassemble themselves into sentences in my brain.

So, you see, it's not because I don't like you or that I don't enjoy your company. As a matter of fact, I'm not always aware that I'm doing the avoiding. But it's all about the hearing. Huh, I guess it's true-- I'm guilty of tone-ism.