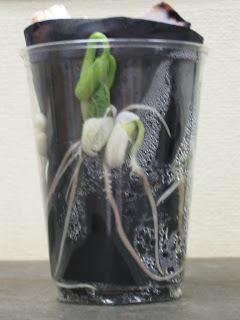 Now that I had to change seed day in science (L wanted to do "inside a seed"), I don't feel like it pulls the kids in the way it used to. If I change it, then I worry about leaving Kim out of something good.
The book I read to them was a bit long for the less mature, but all the information was great and laid out well. One of those treasures I found at Reader's Guide. It's titled, "Busy Seeds", by Simonton-Black & Quakenbush. When I finished reading, we planted pole bean seeds in plastic cups. The beans are slid in between the side of the cup and a cut-to-fit piece of black construction paper. Then we stuff the middle of the cup with scrunched up paper towels. The paper towels hold the water and keep the seeds pressed against the side of the cups. Allowing an excellent view of a seed sending down it's tiny white root and sending up it's light green shoot. Each group helped put together one cup with a seed from each child. We keep the cups in the room to observe. One year, the beans grew from the science table up a 6 foot piece of string to the top of our one tall window. Pretty impressive considering they didn't have dirt!
My pic was published in the online district newsletter today. My face wasn't quite as red as I feared.
F and I, made a trip to Costco to pick-up a prescription and some other needed groceries. She was pretty wiped all day yesterday after her first full hour of PT on Monday.
I best go eat, since she worked so hard on dinner.
Later
Posted by KandN at 7:34 PM