That amazing orange tree . . . does every other house have one? 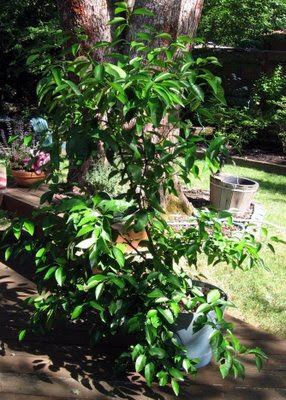 One day, N decided to take one of the seeds from the orange in his lunch and planted it at work. I didn't know, until we moved to Salem and discovered there would be one house plant he didn't want to leave behind in the compost pile. It's grown a little since then, hasn't it? There were a couple of white fly infestations he pulled it through and an unexpected freeze that knocked it back a bit. It's not as temperamental now that's it's older. That or he has the timing down pat of when to bring it in and out of the garage each fall and spring.
When we flew to Virginia and met L's in-laws, what was out on their deck? Her father-in-law's pride and joy. An orange tree he grew from a seed in his lunch.
Posted by KandN at 5:01 PM