Where did the day go? 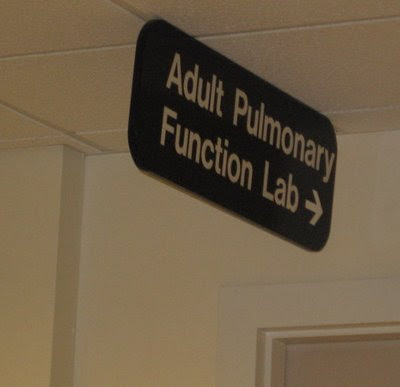 We arrived about 20 minutes early to the Multnomah Pavilion. Good thing, too. They wanted us to go down a floor and over to the next Pavilion to the Adult Pulmonary Function Lab. We could hear the man urging Sara to "go, go, go!", from the waiting room. You would've thought there was someone watching a football game in the next room.
When she was done, we wheeled back over and up to the Multnomah Pavilion. Nurse Anna, called us back, took care of all the little hallway details and after a couple trips up and down the hall discovered that the 3 rooms she had just cleaned and prepped were full from an adjoining clinic. She was trying to be good humored about it, as were we.
She finally had to take us back out to the waiting area.
Later, when they found us a room, the Russian pulmonary fellow, came in and told Sara that the lung function (spirometer) test she took for the second time since her hospitalization showed improvement. She's now at the low end of normal. Since the other tests were done today for the first time, there was nothing to compare them to, but they're pretty sure that the membrane in the bottom of her lungs has scar tissue and this is slowing down the process that gets oxygen into your blood. He told us that the surgeon (Dr. Shephard) he had asked to do a consult on Sara, couldn't find a hernia in the films. So that's why we never heard back. They operate in an interesting way up there. Must be a symptom of being so big? I think he wants to assist us in any way he can, but it's clear there are limitations going this route.
We really need to sit down and do what needs to be done to get copies of all of her medical records. That way, when we find out which direction to head, we'll have everything the new doctor needs.
On our way out of the Portland area, we picked up Jon-the-globe-trekker-come-home. Who is this shaggy man??
We're going to start watching a slide show soon, but first I better whip up a crazy cake for the man.
Posted by KandN at 7:56 PM