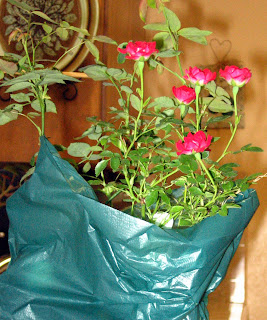 Our desire to gradually switch out all of our grafted root roses to the own root roses (sold by the Heirloom Rose Garden in St. Paul) is turning into a spendy venture. We're not sure, but it appears that on the roses where Lise's dog Nixon pees daily, we're seeing new growth dying. I just read on a garden forum that dog pee shouldn't be detrimental to the roses, but of course (the writer added) too much of anything can't be good.

It's not just Nixon. After planting our first 3 new bushes of the year, Izzy decided it was fun to pull them out of the ground and shake the bejeebers out of them. N kept replanting, but we ended up losing one of them. It was shaken to death.
I found that a liberal covering of cayenne pepper solved that, but the rock I put in front of the target rose doesn't seem to be working. Nixon is walking around to the opposite side. Maybe we just need a bigger rock? Or maybe I should've let N buy that garden gargoyle he spied in the store yesterday? Hmmmm
Any ideas out there?
Posted by KandN at 10:51 AM