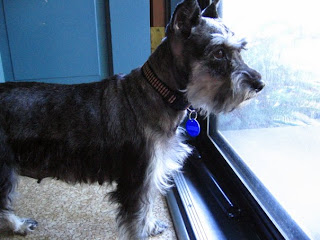 It was either 1993 or 1994, when N and I made the decision to adopt Gretel, a Miniature Schnauzer. Originally, she had been owned (for her first year) by a teacher who ended up divorcing her husband and moving to an apartment that didn't accept dogs. Another teacher (I worked with at the time), adopted her and that's where N and I first met her. We'd been invited over for a barbecue and before I knew it, there was N down on his hands and knees playing with their Golden Retriever and Gretel.   : -)
On the drive home, we began to talk about how a smaller dog on a city lot would make more sense than a Golden Retriever. Talking out loud about getting another dog was a big step for the two of us. When I first met N, he was raising a Golden Retriever puppy named Shiloh. After moving her for the third time to yet another small yard (this time in Tillamook), we realized how hard it was on a big dog not to have an acre to run and explore on--out of boredom she had begun to gnaw one of her front paws until it was raw. After 12 years of companionship and tail wagging loyalty, Shiloh suffered two strokes near the end of our 6 years in Roseburg. We nursed her through the first one, seeing improvement in balance and the ability to walk each day, but when the second one hit just a week later we knew it was time to forget ourselves and do the compassionate thing for our beloved friend.

Just one year after meeting Gretel and 2 years after losing Shiloh, we experienced unexpected joy to discover that my teacher thought of us when they decided they could no longer give Gretel the kind of attention she needed. It took several days for Gretel to realize this was her new home, but once she bonded to us we knew we'd made the right decision. What a sweet companion! About 8 years later, we discovered that Gretel had been born with a life shortening heart defect. I was glad that even though the girls were older, we were all at Gretel's side when she passed away.
After that heartbreak, N and I decided not to get another dog, but what we didn't plan on was how much we've been enjoying helping Fran raise her puppy, Izzy. Which is probably why I've been scanning Kathi's Schnauzer site every week, trying to deal with this puppy-itis. Then a few days ago I discovered Kathi had to make a tough decision to adopt out her 5 year old female, Hope. She's produced some beautiful puppies for her, but lately has been picked on by two new females.While I'm sad for Kathi, I'm excited to have this sweet dog for our own.
Posted by KandN at 6:59 AM

Izzy can't wait to meet Hope! She's so excited (by that I mean she's passed out on the floor in front of me)!

lol
Hope's getting a bit more comfortable. She cuddles some, but then acts like she's feeling guilty, "am I cheating on Kathi?". She did a playful little batting her front paws thing at me while I was on the couch this afternoon. Pretty cute! I think it's good that she'll have had time to feel at home before meeting Izzy.