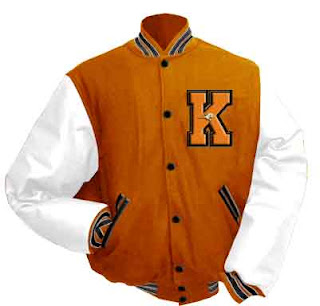 Growing up in a small town of which probably 12% were relatives (population 1500), created some interesting situations while growing up.  (Aunt Shirley, I swear that wasn't me hanging out that car window flipping everyone off on main street.) Our town didn't have a movie house or any other good gathering place during my growing up years, but there were high school sports.  The most popular?  Football.

Our wood stadium proudly sported our team name and was always populated by loyal, loud fans. At least as long as the team was winning.  One of the school's traditions was to kick-off the season with a big bonfire in the stadium parking lot.  Both the cheerleaders and football team would attend in uniform, and students would wear their letterman jackets if they had them.  I have this vague recollection of the bonfire being discontinued in my last few years of high school.  There must've been some sort of scandal.  It didn't take much to qualify as one in the early 70's.

I remember some small, but fast quarterbacks, defenders' knees being blown out, great coaches who made lousy teachers and one of our least popular principals writing a letter of apology to another school when we beat them by a ridiculous score.  He had a point, but you didn't want to be caught siding with him.

During my last year or two, when I became an expert in self destruction (long, sad story that began when I was 5 or so), my pals and I would attend the games just long enough to say we were there.  Parties and keggers became our focus.
And now I've grown up.
Kinda.  ;>)

There he is, my little brave.  Of course, he changed since he was in my coloring book.  He used to have a clutch of arrows in that hand, for one thing.
Posted by KandN at 7:22 AM

What was your mascot?

In Oregon City (the original O.C. -- no matter what those folks in L.A. say!!) Fridays were always Spirit Day and we'd wear as much Red & White as we could to support our Pioneers!

I think I was part of the crowd who stayed and watched the game, but secretly wished we'd been invited to take off to the parties that the other kids went to. Regrets on both sides, I suppose. =O)

Looking forward to a good game today, and no worrying about dropping my red vine underneath the bleachers!

G, We started out as the Chinook Indian (mascot picture inspired by a picture from one of my coloring books. my older sisters were yell queens.) Then about 10 years ago, there was pressure to change to something less offensive than a caricature of an Indian -- a salmon. :>)
K, Ah yes, Fridays! We loved the team having to wear dress shirts and ties. :)
Just think of all the trouble you stayed out of. You really didn't miss anything--not that I remember. ;)

Thanks for sharing your story about your wild past. Was it hard to leave your small town?

Jessica,
It was hard leaving family, but I was ready to shake off the dust of that little town.
Although, now I have moments when I wish we could've stayed. Instead of escaping my past, it's been frozen into my relatives brains that I'm still that ornery little scamp they once knew.

KandN,
I often romanticize about living in a small town, but I think we get the best of both worlds here in Salem. Not too big, not too small...just right. I'm hoping when my children grow up they would agree with me and stay close.

The benefits were having nearly all of our family within a 6 mile circle. The main con (for me), was having a small school without a big variety of options (typing and choir kinda sums up what our electives were) or people to choose to make friends with.
I think you're right about Salem. It's big enough to offer what a small town can't and small enough to have a circle of newly adopted family.