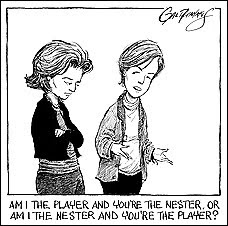 I read the following in Carolyn Hax's column last week and immediately wanted to share and just as immediately forgot.  :>.  It came from a longer column about a couple who had both lived alone for many years and finally made the decision to move in together.  The woman felt like all they were doing since sharing space was to argue over every small detail.  Carolyn's advice?

"One way to get out of the fighting loop is to drop your end of the fight. Not on everything -- we all have some non-negotiable terms -- but on just about everything except those core issues. You can figure out which those are by asking yourself, "Is this the hill I want to die on?" (I stole that line from my neighbor.) And whenever the answer is no, you just let go.
This isn't a permanent solution; eventually, you'll get sick of surrendering, even if it's only on the little things, and there's also the risk that you'll start caving on the big ones, too.
Right now, though, your immediate goal is to stop going 10 rounds over where you keep the butter. Once the bickering clears, then you can start figuring out ways to fold each other into your lives without wiping out anyone's sense of self"
Posted by KandN at 7:29 AM

I loved that question, "is this the hill I want to die on?".
I feel like I should have it as my mental screen saver--just as a reminder.