I've lost track of how many years I've been baking them, the truth is--I love me some tomato tart. Especially Joanne Weir's.
After discovering the tarts/galettes, I've got into the habit of making one for dinner about four- five times during the summer. Each baked bite tastes like all the best parts of summer-- fresh tomatoes and basil with cheese. (Swoon)
Then, a handful of months ago, we discovered that N's gut no longer tolerates gluten. The changes weren't as life shattering as I feared. The bread is okay, not great. We've found good cookies and crackers. And most importantly,-- we've had some good luck with the gf flour blends. (Yay for pancakes!)
We've made changes to our daily diet with good results, so why oh why was I dragging my feet about making a galette? This question caused me to have a bedtime chat with myself, "you were nervous and slightly reluctant to make your first pie crust, yet when you finally made one the world did NOT end or even shudder. Find a fekking recipe and make it, ya big baby!" And so, FINALLY, I did.
The dough was crumbly--reminded me a little of shortbread. After mixing the dough together, I did the usual wrapping in plastic wrap and resting it in the refrigerator. It improved slightly. I carefully attempted to roll it out on my old Tupperware pie crust mat. (I read something about rolling the crust out between two sheets of plastic wrap, but I was concerned about it turning into a big sticky mess.) 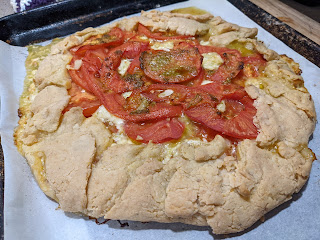 Without the elasticity of the gluten, the dough split apart along the outer edges (3" or so). I decided to carry on and not mess with the dough too much. I carefully distributed the mixture of cheeses and basil onto the middle 8-10" of the dough and stacked the thin sliced tomatoes on top. Bringing up the edges of the dough, to hold in the filling, was like a cut and paste project, as I tried to repair and hold together the edges, but it worked.
The end result was delicious, though the crust was more chewy than flakey. Next time I'll either add more butter or use one of Bob's Red Mill GF pie crust mixes. AND there will be a next time.
Love, K
Posted by KandN at 12:08 PM