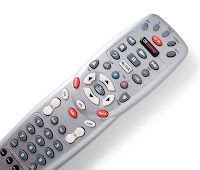 N, Jonathon, Fran and I were in the living room watching Gladiator last night, when I heard "the noise".  (Well, to be honest, Jonathon was catching some z's and watching the movie through his eyelids, but back to the noise.)  I was pretty sure it was a glass tipping over in Jonathon's vicinity.  My fear was what was in that glass.  When I looked down I was simultaneously relieved it was water and anxious that the spillage occurred right smack dab on top of the one and only remote control that works the comcast box.
Fran and I immediately began electronic CBPR (circuit board).  We removed the batteries and swung it around in turns, to (hopefully) remove as much water as possible.  Then we left it upside down, checking it periodically to see if it was operative.  It would work and then do weird things on it's own.  So we'd have to turn it to the movie and then bury it under a pillow to keep it from going through random channels.  As the evening went on it's behavior became more erratic and then finally ceased altogether.
Before heading to bed, I put the remote in a baggie with a moisture reducing packet that came with my hearing aides.  By morning it was still exhibiting spotty and inappropriate behavior.  Jonathon and I had come to the same idea (with different ingredients) at the same time.  He was thinking we should bury it in a bag of rice and I wanted to put the remote in a bag of coarse salt.  He voiced concern over the salt getting into the electronics, "how about we put it in a sock??", I suggested.  He gave me a 'you're silly' smile and went back to Fran in the living room.
Several hours later I removed the remote from the salt and sock, replaced the batteries and gave it a test run.  Yahoo!  All is right with the world!  Once again we can use it and complain "all these channels and still nothing to watch!".  :>)
Posted by KandN at 7:40 PM

I have the opposite problem. My hubby's a cable installer and we have a million of these remotes waiting to go to new homes. Glad you got it working. Can you imagine having to get up to change the channel? Blech!

Amber,
So you're the go to person when a remote goes on the fritz? ;>)
That was the most frustrating thing--not being able to even change the channel manually. Silly box!! But then we ARE the ones who always opt for as basic as we can get.

That was GREAT idea. I don't think I would have thought of it. Good job!

Cindy,
I'm sure we're not alone in losing a fair number of electronics to unfortunate liquid circumstances. We've used our noggins with each one, but the results are never perfect. Then I heard a story on NPR about someone being curious after reading it was possible to wash your keyboard in the dishwasher. The trick, they said, was in allowing enough time for the drying before activation. Hmm, how did I get to that story?? Still not sure where the salt idea came from--maybe the food network! :>D

How nice it would be to have 2 remotes in the house. To replace one if it accidently gets spilled on OR so the wife can have controlled of a remote once in a while instead of the husband!!! Not that that's a problem at my house.

SS,
I look at the commercial on TV for the new fancy universal remote that replaces all others and wonder first how much it costs and second--do they sell them in twos??